The only haemostatic gauze used by the UK Minstry of Defence and the haemostat of choice by multiple NATO forces. Celox™ Gauze is the most effective dressing for immediate haemostasis.

Celox™ gauze haemostat is for pre-hospital use by trained emergency responders to stop bleeding from life threatening injuries, including those involving major arteries.

Pack the gauze directly on to the bleeding source and hold pressure for three minutes to stop bleeding from arterial injuries, gunshot wounds, road traffic accidents and other life-threatening bleeding injuries. 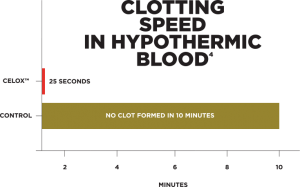 so it works on hypothermic blood that does not clot normally, often found in serious casualties. Celox granules also work just as well on blood containing anti-coagulants such as warfarin or heparin33.

This study was carried out in order to review the DoD recommendation for choice of hemostatic gauze.